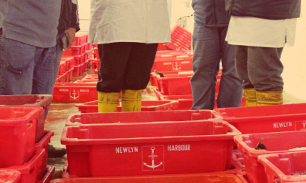 For the past 20 years, I’ve been organising holidays in Cornwall based on where the best restaurants are located. Back in the Nineties, Rick Stein’s emerging dining empire took me to Padstow; I then migrated to Fowey and nearby Polruan on the south coast when chef Nathan Outlaw had his signature restaurant there (now relocated to Port Isaac), and headed for Watergate Bay when Jamie Oliver opened Fifteen, arguably his best venue. Now Penzance has been put firmly on my gastronomic holiday map by the recent opening of The Shore.

Chef and owner Bruce Rennie used to work for Rick Stein at his restaurant in Porthleven, and he’s now serving some of the best seafood in the country at his elegant 28-seater town-centre restaurant. Dishes such as John Dory with Indian spiced chickpeas are cooked with to-the-second precision and have the instantly recognisably clean, bright flavour of fish fresh from the sea – not surprising, given that Newlyn Fish Market is one mile from the restaurant’s front door. Working single-handedly, Rennie produces everything from stunning desserts such as blackberry semifreddo with pistachio sponge to superb mini-sourdough loaves himself.“There are a lot of eateries in Penzance but there was scope for a restaurant of this style, something a little bit finer but affordable and not too stuffy,” says Scottish-born Rennie, who has lived in Cornwall for seven years and moved to Penzance to open The Shore last summer.

“We’ve got a few good places now, such as The Mexico Inn in Longrock, which has been taken over by Tom Symons, one of my old sous-chefs, and The Coldstreamer in Gulval that’s now run by a former Porthminster Beach Cafe chef. It could be the start of something really interesting.”

Another chef with his eye on the town’s restaurant scene is Ben Tunnicliffe of the highly rated Tolcarne Inn in Newlyn, on the southern outskirts of Penzance. “I love Penzance, it’s a fabulous town with so much potential and at the moment it’s on an upward curve,” he says. “I’m considering opening something in the town centre.”

Until that happens, it’s worth taking the 20-minute stroll along Penzance’s promenade (the only one in Cornwall) to Newlyn Harbour to dine at the Tolcarne Inn. The only menu in the 300-year-old, white-washed pub is the one chalked up on the board above the bar, and it changes daily depending on what’s available from the market. My autumnal, rustic seafood feast included scallops with black pudding and an onion and orange marmalade followed by pan-fried fillets of “jumbo” plaice with mash, roasted parsnips and hazelnuts.

I divided my stay in Penzance, Cornwall’s second largest town after Falmouth, between Chapel House and Artist Residence, two boutique properties both on Chapel Street, the main thoroughfare from the harbour to the town centre and both ideal for foodies.

My spacious and chic room in the rafters of Chapel House was kitted out with freestanding slipper bath, iPad and views of Mount’s Bay. It would be reductive to call the magnificent, recently converted Georgian town house (and former site of the Penzance Arts Club) a B&B, but that’s effectively what it is, albeit one with an elegant, high-ceilinged double drawing room. Owner Susan Stuart prepares superlative breakfasts from local ingredients, including a terrific bacon sarnie made with Cornish sourdough from Vicky’s Bread in Helston and excellent home-cured bacon from fourth-generation butcher Ian Lentern, whose shop is a stone’s throw from Chapel House.

Stuart also serves supper on a Friday and Saturday evening in the house’s stunning open-plan kitchen, celebrating local produce in dishes such as warm leek and Cornish goat’s cheese tartlets; a fragrant lemongrass, chilli and lime-leaf broth packed with local seafood such as pollock, prawns, crab claws and scallops; and a Cornish saffron cake bread and butter pudding made with marmalade from a local farm.

A minute’s walk away, Artist’s Residence is a more quirky, bohemian take on the boutique hotel. The door to my room is decorated with Penguin book covers, the bedside table is a packing case and there are Fifties-style retro chairs and stripped wooden floorboards. Downstairs, the Cornish Barn restaurant flaunts a corrugated iron-clad bar, bare metal table tops, school-style chairs and a menu that puts a dude food spin on produce from the county, with dishes such as crab balls with blackened tomato and dill tartar sauce.

The two properties embody the town’s delightful eccentricity, where the genteel and contemporary co-exist side by side, and nowhere more so than on Chapel Street, where the classical frontage of the Wesleyan Methodist Church provides sombre contrast to the exuberant folly that is the Egyptian Building, a Landmark Trust holiday property with a garishly painted three-storey-high stucco façade, complete with lotus columns, ornate mouldings and trapezoidal windows.

Chapel Street and the immediate surrounding area form an eating and drinking hub with everything from casual, all-day dining at the smart, modern Blacks to Cornish-reared steak at the Bakehouse, a converted bakery tucked away in a courtyard. The 750-year-old Turks Head pub, a former haunt of smugglers and pirates, has recently gone upmarket with a MasterChef: The Professionals semi-finalist in the kitchen, serving fritto misto of Cornish seafood and smoked duck salad.

But you’ll need to cross town to the residential streets above the train station for Penzance’s most idiosyncratic drinking experience. The Lamp and Whistle, a tiny corner pub with a carved wooden bar, ceiling covered in framed paintings and an indie soundtrack, has bags of style and atmosphere and plenty of attitude to match. Make sure you bone up on your craft beers and ales or you might find yourself on the wrong end of owner Miguel’s sneer, but it’s all part of the fun. Book in advance for the highly rated Wednesday supper night and Sunday lunches.

If you want a more traditional Cornish pub experience, walk 500 yards to The Crown where they pull pints of excellent real ale, made in their microbrewery on the outskirts of town.

Penzance isn’t limited to beer, though. Former fish merchants John and Kim Coulson produce about 30,000 bottles of sparkling and still wine at Polgoon Vineyard and Cider Orchard, just off the A30 on the outskirts of the town. It is open for tours and tastings between April and October. You can also buy the wine at the excellent Mounts Bay Wine Company in Bread Street in the centre of town.

Of course, there are cream teas and pasties if you want them (try The Bay for the former and Lavenders deli for the latter), but just make sure you leave room for the real taste of Penzance.

Stevenson and Newlyn harbour have welcomed students from Falmouth University who are focusing their projects on the fishing industry.
Georgia Paine, a student of Falmouth University is an example of the interest in the industry. Currently in her 3rd year of a journalism degree, she decided to visit the fish market to produce a photo-feature for her project.

Georgia wanted to “capture a true representation of the harbour and the profession and present it in a positive light”, so took photographs of one of the Stevenson fleet, Billy Rowney PZ 532 landing her catch and came to the market to watch and photograph the auction.

Georgia became interested in visiting Newlyn harbour after watching Monty Hall’s program, where he went to Cadgwith cove and looked at the fishing cooperative there. “The program got me thinking about the strong fishing industry in Cornwall. I had vaguely heard of Newlyn fish market, so started doing some research into the market”.

Darren Payne, Market Manager for Stevenson is happy to see people taking an interest in the fishing industry. “We don’t mind visitors to the market,” he said, ” it’s good to encourage people to get to know more our industry and how the Newlyn market operates.”

With over 100 years in the fishing industry Stevenson know a thing or two about fish. With the largest privately owned fleet in Britain, we catch, land and sell the finest fresh fish from Newlyn harbour in the far southwest of Cornwall. Our own fleet of boats allows us to have control over the entire process, from catching the fish, washing, icing and storage to final sale. With careful handling throughout the entire process, we can ensure you get the highest quality fish on your plate every time. Come and visit our shop in Newlyn to see the quality of our fish for yourself or we can even arrange for a box of fish to be delivered by first class courier, direct to your door.